The Directive 2012/27/EU on energy efficiency has been adopted by Legislative Decree of July 4, 2014, n. 102 which introduces methodologies to achieve the reduction, by the year 2020, of 20 million tons of oil equivalent of primary energy consumption, equal to 15.5 million equivalent tons of final petroleum energy.

Article 8 “energy audits and energy management systems” sets the requirement for large companies and enterprises with high energy consumption to perform an energy audit by December 5, 2015 and thereafter every four years, in accordance to the dictates of the decree, through an Esco, an EGE or an energy auditor.

A company is an energy-intensive business when it respects these following conditions:

A company is defined large enterprise business when it fulfills at least one of the following conditions:

Businesses that do not carry out the energy audit within the time limits, or in a manner contrary to the decree, will be subject to administrative penalties of up to € 40,000.00 per year.

The message that GMT SpA would like to spread is that the energy audit should not be seen as an obligation but as a real opportunity to save energy and money. 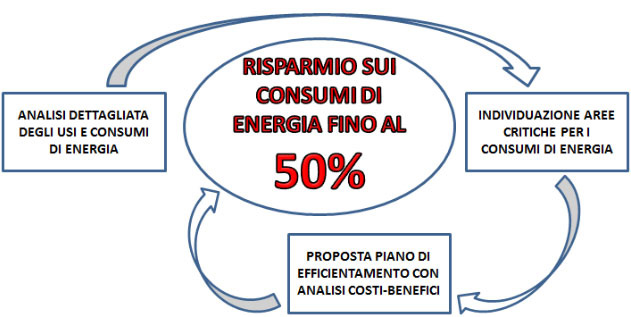